Thomas Brown is Dorcas's head postman. Thomas is a devout Christian, a teetotaller and non-smoker. He has worked for Dorcas since he was a young man and is devoted to her, if occasionally frustrated by her decadence and lack of piety. Thomas has a reputation for lecturing and sermonising – people have been known to run in the opposite direction when they see him coming in case he starts asking impertinent questions about their souls. He is convinced that eventually he will succeed in converting all his friends, even Dorcas. And until that day he will not rest. Thomas can take his obsessions to extremes, but he's no hypocrite, he practices what he preaches, has a true heart and an unswerving loyalty to Dorcas.

The Local Clergyman of Lark Rise, Fordlow and Candleford and Father of Margaret Ellison (Brown) 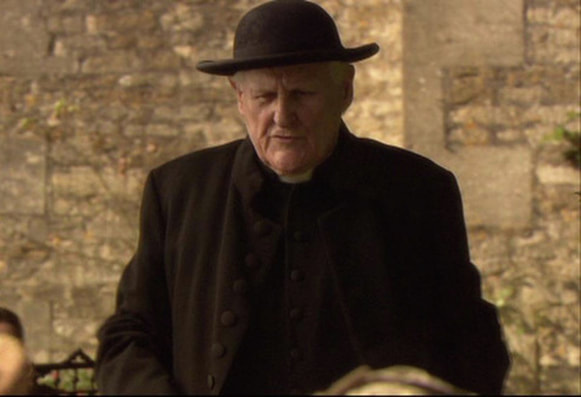 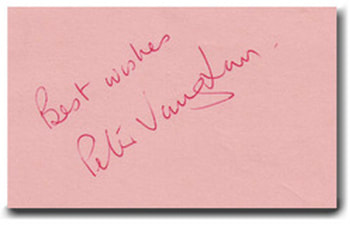 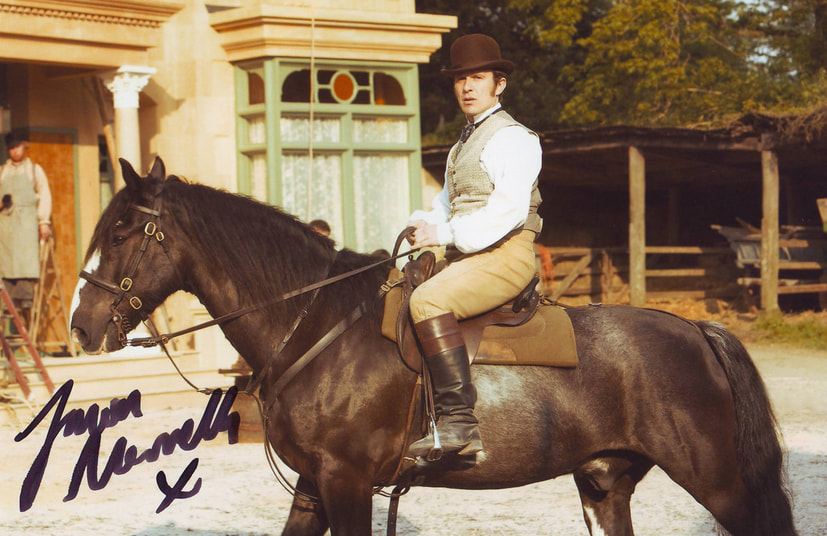 James Dowland, the handsome and charming hotelier rides into Candleford fresh from recent success in London. Guaranteed to turn a few heads along the way, Dowland is a man of mystery that a few of the residents may well already recognise.
Dowland is a self made man to a certain extent. He comes from Lark Rise originally as an orphan who was looked after by Queenie (Linda Bassett). Dorcas's father was a bit of a philanthropist and gave the young Dowland, a silver thru pence, which was very key to his imagination at the time and he took that silver thru pence and left Lark Rise to find his fortune.
James made his living through livery stables, perhaps through the back of hotels, to the front of hotels and then slowly worked his way up, eventually managing quite a fashionable London hotel. Years later he decides he wants to come back and see where he came from and if he can make a name for himself there. So one day he literally rides into town with all these expectations and tries to make a go of things.There is also talk of an attraction between James and Dorcas, he really sets his sights on Dorcas because she is the beautiful one; she's very strong and really challenges him and they are constantly bickering over the way Dowland does things.

Video Courtesy of The BBC (You Tube) 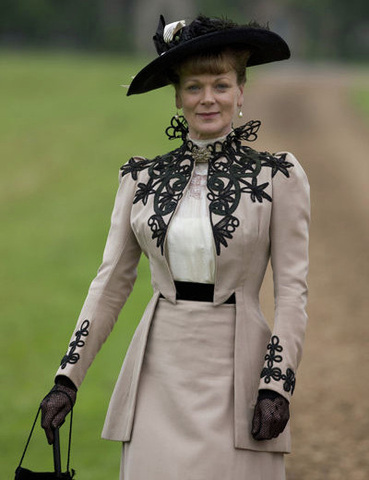 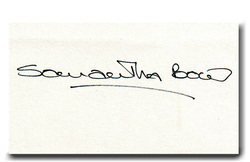 The Stores : General Drapers and Dressmakers

The Pratt Sisters - Pearl and Ruby

The Pratt sisters run the women's clothing store in Candleford. Neither is married and they spend most of their time running a critical eye over other people's affairs. Pearl is the elder sister and takes the lead in ensuring that the highest standards are maintained in their shop and in the town as a whole – while her younger sister Ruby is always quick to back her up. The characters are spinster sisters, their mother died when they were very young and their father ran away so they were very much left to fend for themselves. They changed town because they were very worried about the scandal and the rumours about the fact that their father had deserted them and reinvented themselves.
They run the high fashion shop in Candleford, which is constantly getting all the new French fashions in, and are regarded as terribly fashionable when actually they get it slightly wrong most of the time and end up looking on the freakish side of high fashion. The Sisters are very concerned with what people think. They need the approval of Lady Adelaide and Sir Tim and are constantly trying to get Lady Adelaide to buy from their shop and look down their nose at everyone else but it's all based in fear.

Ruby Pratt ....Ruby is a step behind Pearl, mentally, most of the time but Ruby is very perceptive, sensitive and aware of things that Pearl, in her frantic scheming, doesn't necessarily have.
Victoria Sharp (born 5 April 1971) is an Englishactress who performs under the stage name Victoria Hamilton.
Victoria is best known for her roles in costume drama. She appears as Ruby Pratt, one of the major characters in the BBC1 series Lark Rise To Candleford. Other roles have included Mrs Forster in the Emmy-winning British 1995 series Pride and Prejudice and Maria Bertram in a 1999 film of Mansfield Park. She also played Queen Victoria in the BBC-TV production Victoria & Albert in 2001 She has been a member of the Peter Hall Company, the Royal Shakespeare Company and the National Theatre, as well as appearing in the West End and on Broadway. 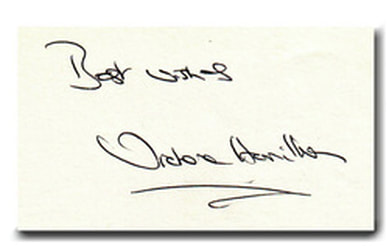 Pearl is in a state of panic. She has received a dressmaking commission which could save her ailing business, but without Ruby, there is no way she can do the work in time. So when Enid Fairley, a talented seamstress, arrives in Candleford looking for a job, it seems Pearl's prayers have been answered.
Pearl and Enid form an instant bond, based on mutual admiration and respect. But when Pearl discovers the seamstress is not who says she is, she is forced to choose between their friendship and her deepest prejudices.

Mr. Ashlow arrives in the village looking for his two daughters, who turn out to be the Pratt sisters. One of the sisters is not pleased to see him and will have nothing to do with him. They also shock Candleford with their new window display. Ashlow engages Caroline as a prop in selling his patent medicine, which proves to be quite popular, and in his gambling which proves equally lucrative. Dorcas shows Laura her dead letter box containing correspondence that cannot be delivered or returned to the sender. In it, they find many letters written to
his daughters under their previous names..... Series 1 - Episode 4 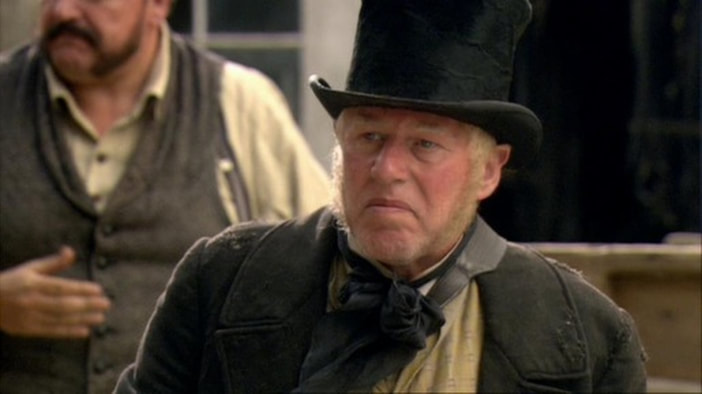 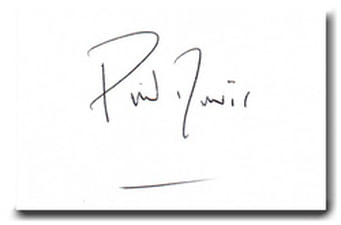 Dorcas Lane arranges for Patty, a young woman from the workhouse, to work as a housekeeper for Old and Young Amos. She is an honest and hard worker who found herself in the workhouse though no fault of her own, but that doesn't stop the village gossips from having their say. Problems do arise when both Old and Young Amos decide that they want to marry her. The town become suspicious that she may just be after Old Amos's money but its Young Amos Patty she falls in love with.... Series 1 - Episode 3 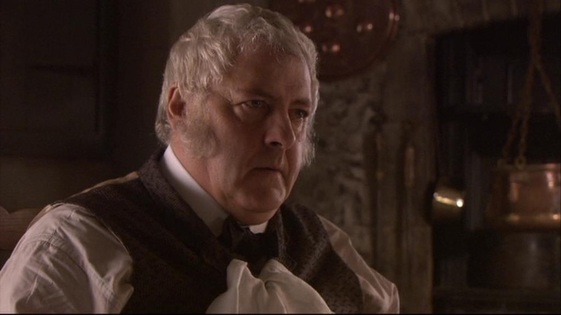